The third largest city in Israel, traditionally known as the city of workers, is set on the slopes of Mount Carmel and next to the Mediterranean Sea. It is home to the largest international seaport in Israel and the Bahá’í World Centre, which is known for its magnificent gardens.

If traveling from Jerusalem, you can take the Egged bus from the Jerusalem Central Station. Bus no. 940 and bus no. 960 run multiple times a day, except during Sabbath.

Upon arriving to this lovely city in the afternoon and with the temperature being around 33°C/91°F, we decided to visit the beach first to catch some sun and waves. The Bat-Galim Beach near our hotel was quite small, yet very clean and charming, and as we learned very popular with sunbathers and surfers.

Late in the afternoon, after the heat started to cool down a bit, we went for a walk on the Bat-Galim Promenade and ascended Mount Carmel in the cutest cable cars – a trio of orange balls (one way ticket costs NIS 19, while a return ticket is NIS 28) that offers amazing views of the city and the sea. At the top, we have visited the Carmelite monastery of Stella Maris (“Star of the Sea”) and admired the view before catching a bus to the German Colony.

Centred around Ben-Gurion Boulevard, which is now a promenade with some very nice restaurants and cafes, stretching from the Bahá’í Gardens to the sea, the German Colony was established in the 19th century. For interesting facts and details, you can read the German Colony story from several boards that are set up along the promenade.

“During the mid-19th century a new reform movement sprang up in Wirtemburg, Germany. Its staunchest proponents left the Protestant Church and established the Association of Templers (not to be confused with the Knights Templar). They declared as their mission the settlement of the holy land and the establishment of an exemplary Christian community. In the Autumn of 1968, the two leaders Christoff Hoffman and Georg David Hardeg left for the holy land and settled next to the port cities of Haifa and Jaffa, establishing the first German Colonies.” 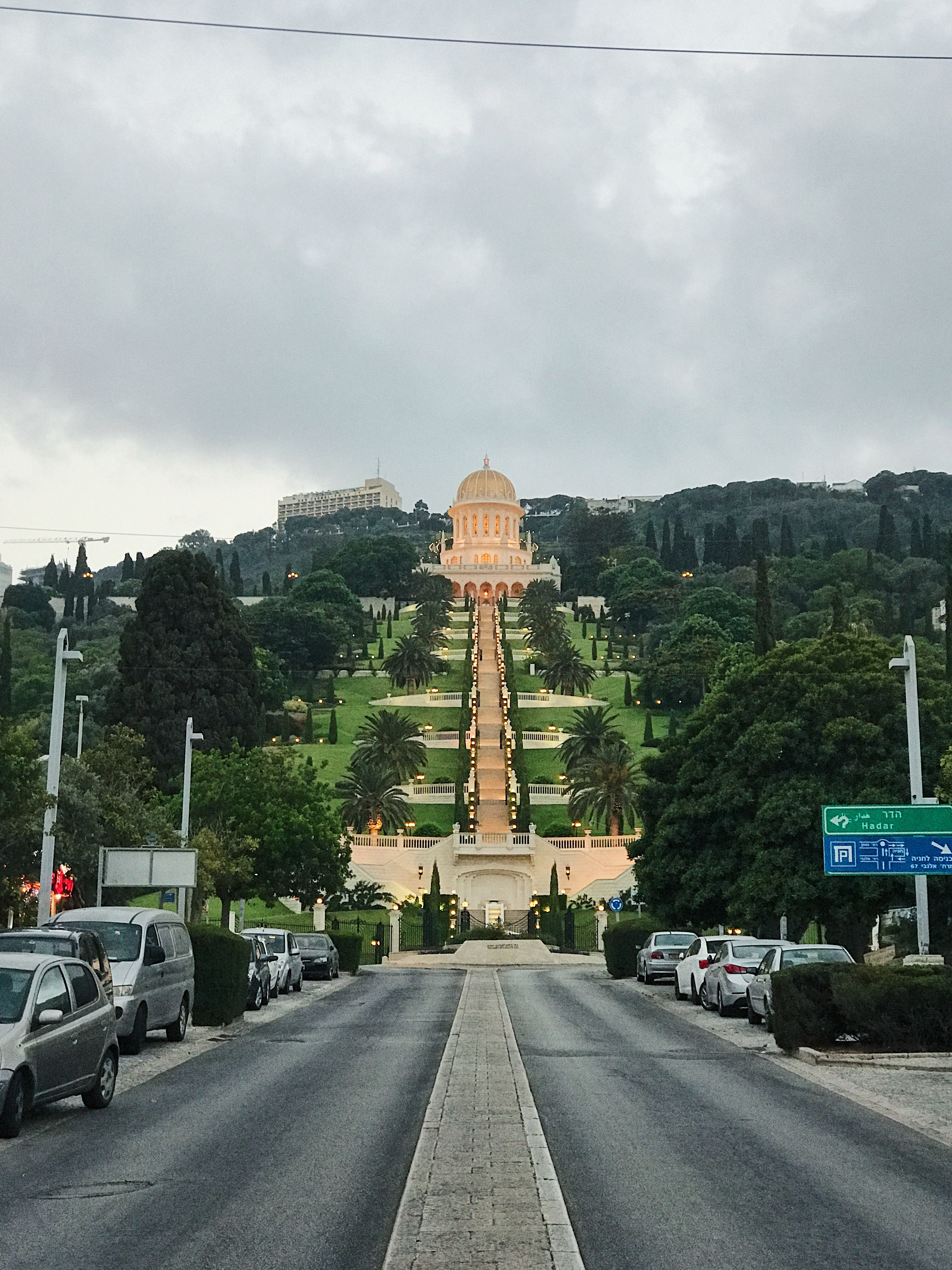 The next morning, we have visited the breathtaking Bahá’í Gardens; one of the most visited tourist attractions in Israel. The so-called Hanging Gardens of Haifa are actually nineteen perfectly arranged garden terraces surrounding the golden-domed Shrine of the Báb, which contains the remains of the Bahá’í Faith’s first prophet (making it the second holiest site for its followers). Sometimes described as the Eighth Wonder of the Word, the Gardens have been inscribed as a UNESCO WHS in 2008. Read more about the Bahá’í Faith here and here.

When planning your visit, it is important to understand that the Gardens are divided into three sections, which are not interconnected. Access to the Gardens is limited and each section can only be reached from the outside.

Tip: dress appropriately (modestly) by covering your knees and shoulders and bring some water when visiting during summer months

We didn’t manage to join a tour, as we were in quite a hurry to catch the train to Tel Aviv (the trains run until approx. 2 PM on Fridays), but we did visit the Outer and Inner Gardens and admired the panoramic view from the Upper Gardens balcony. I believe it’s needless to say that the Gardens are definitely worth visiting, but as they say “a picture is worth a thousand words“. 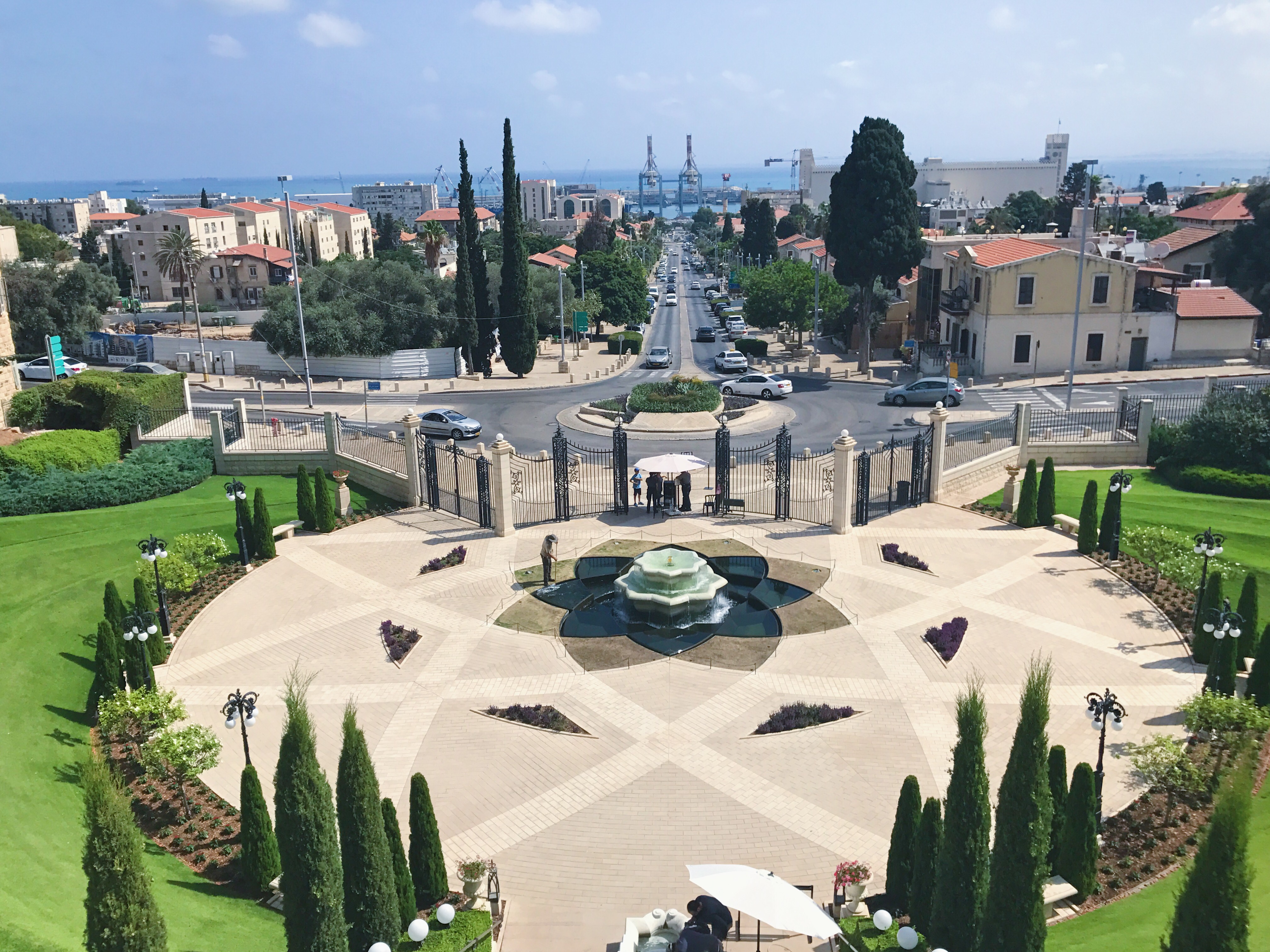 If you have the time, Haifa is also a good starting point for visiting Caesarea, Acre (Akko), Nazareth and the Sea of Galilee.

We stayed in Haifa overnight and we’ve chosen the loveliest boutique hotel, the Bat Galim Boutique Hotel, for our accommodation. Conveniently located near the Bat Galim Train Station and near multiple bus stops, the hotel was also mere footsteps away from the Bat-Galim’s promenade and sandy beach. With a lemonade stand always at the ready to ease the hot summer days, beach inspired rooms and the cutest reception by day/turned breakfast bar by morning (with delicious, fresh ingredients might I add), we truly enjoyed our stay there! 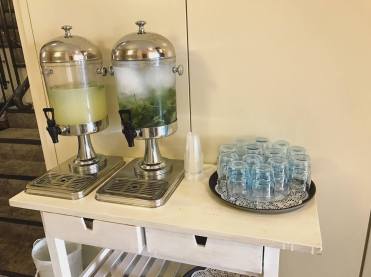 2 thoughts on “Haifa: home to the Bahá’í Gardens”