One of the most historically preserved cities in Europe, Prague offers fascinating history, spellbinding architecture, charming and almost fairy-tale-like cobblestone streets, excellent food and beer, and much more. Not surprisingly, Prague makes the list as one of the most visited cities in Europe. Reports show that last year alone (2018) almost 8 million people chose Prague as their destination.

I was a bit anxious before heading over there, as it was my first ever solo trip. Prague turned out to be a great choice for a female solo traveller – it’s very safe, easily navigated and the locals are very friendly.

Here’s my travel guide on how to spend the perfect 4 days in Prague.

One of my travel tips is to not sleep in. Believe me when I say, I’m usually not a morning person at all, but when I travel, I tend to wake up quite early to make the most of the day. I suggest you do the same, especially as Prague has so much to offer.

After a hearty breakfast – you’ll need the energy for all the walking you’re about to do – start your Prague adventure at the Old Town Square (Staroměstské náměstí). It hosts several interesting sites, but we’ll get back to that later in the day, as it’s first time for a walking tour!

I would strongly advise going on a free walking tour (especially if you’re a solo traveler), as it will give you a sense of direction around the city, you’ll learn plenty new and interesting facts and you’ll get to meet fellow travellers. I recommend the 10 AM tour by SANDEMANs, starting from the Old Town Square. The tour takes approximately 3 hours and is completely free, but it’s customary to tip the guide at the end. Book ahead at their website.

After the tour, grab some lunch. Our tour guide recommended the Restaurant Sedm Konšelů, not far from the Jewish Cemetery (where the tour ended), which indeed offers tasty Czech meals at affordable prices, plus it has a nice courtyard terrace.

It is now time to cross the Charles Bridge (Karlův Most), which is by far the most iconic sight in Prague. Once the only means of crossing the river Vltava (until 1841!), legend has it that it was King Charles IV himself, who laid the first stone of the bridge in 1357 (construction ended in 1402), yet it is only called Charles Bridge since 1870. The bridge is rich in sculptures, there is a magnificent Gothic bridge tower on each end (you can visit the top) and it offers amazing views of the Prague castle. However, if you think that you will experience the romantic, deserted atmosphere usually seen on images, think again. Being the most popular attraction, means it’s also the busiest one, and Charles Bridge is constantly packed with tourists. 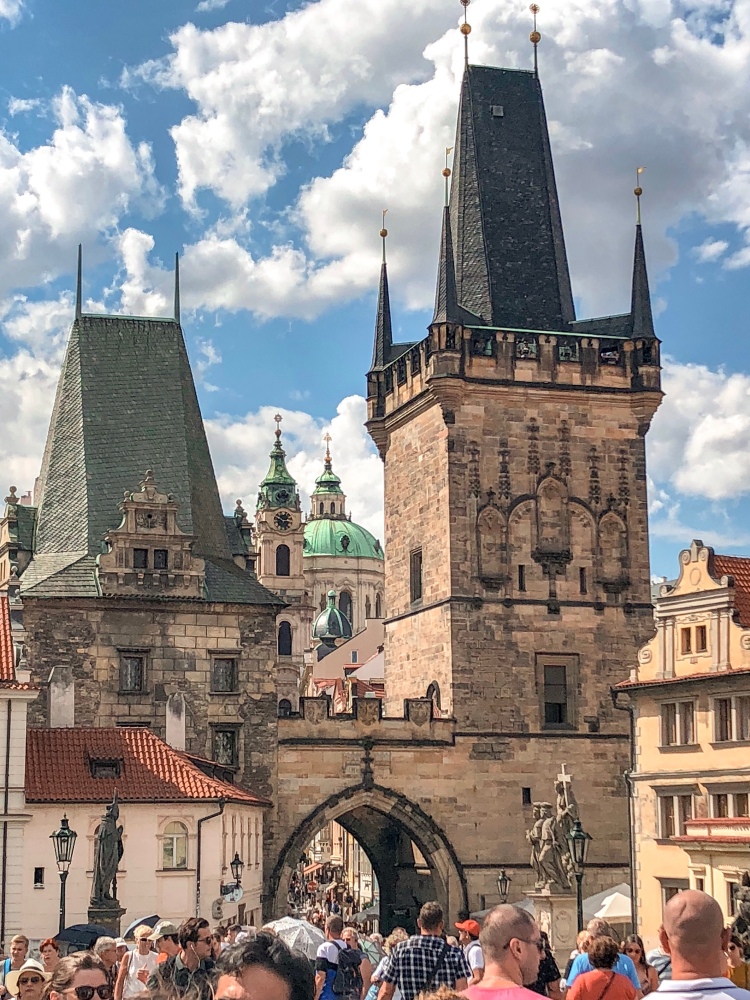 On the other side of the river Vltava, you will find the so-called Lesser Town (Malá Strana), which (if you follow this itinerary) you will explore in more detail the following day. On today’s list, however, there’s visiting the Petřín lookout tower (the entrance fee is CZK 150), located on the same side of the river. You can either take the funicular or walk up Petrin Hill, as I did – it’s a feasible 30-minute uphill stroll through woods and gardens (bring a bottle of water!). The tower was built as a mini version of the Eiffel tower and there are 299 steps to climb to reach the top – the view from there is amazing!

Head back to the Old Town Square, where you can now take the time to marvel at all its the amazing features. Unfortunately, during my visit (August 2018) the famous Astronomical Clock (Orloj), which dates back to the year 1410, making it the third-oldest astronomical clock in the world, was undergoing renovations, but it has since been restored to its former glory. Every whole hour, the 12 Apostles parade in the windows of the astronomical clock.

Prague showcases several architectural styles (Romanesque, Gothic, Cubism, Art Nouveau, Rococo, etc.), many of which you will be able to admire at the Old Town Square or its close vicinity. The Gothic Church of Mother of God before Týn is a dominant feature of Prague, with its twin spires. If you look closely enough, you will notice the asymmetrical nature of these spires; the larger one is ‘Adam’, the smaller one ‘Eve’, representing the masculine and feminine. Here you will also find the Baroque Church of Saint Nicholas, the Old Town Hall and the Jan Hus Memorial, dedicated to the famous church reformer, who was executed for his beliefs. 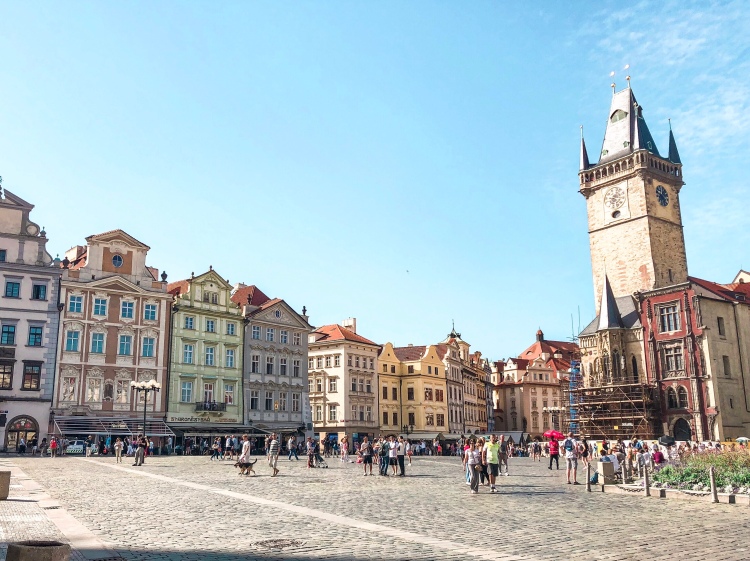 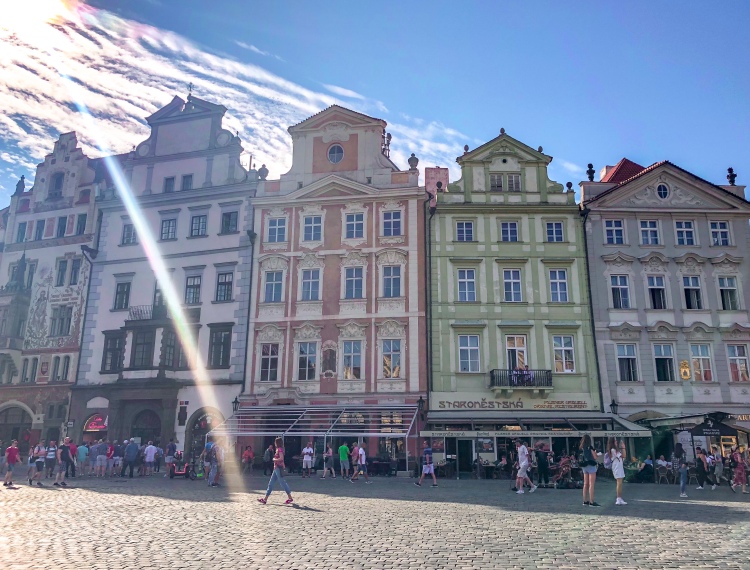 Next, head to Wenceslas Square, which is not nearly as beautiful as the Old Town Square, but it is equally historically important. It is here that the proclamation of independence of Czechoslovakia was read in 1918, where Nazis organised mass demonstrations, and where demonstrations were held during the Velvet Revolution in 1989. As you will learn during your free walking tour, the square also marks the spot where, on 16 January 1969, a 20-year-old student named Jan Palach self-immolated himself in protest of the Warsaw Pact invasion of Czechoslovakia in 1968. 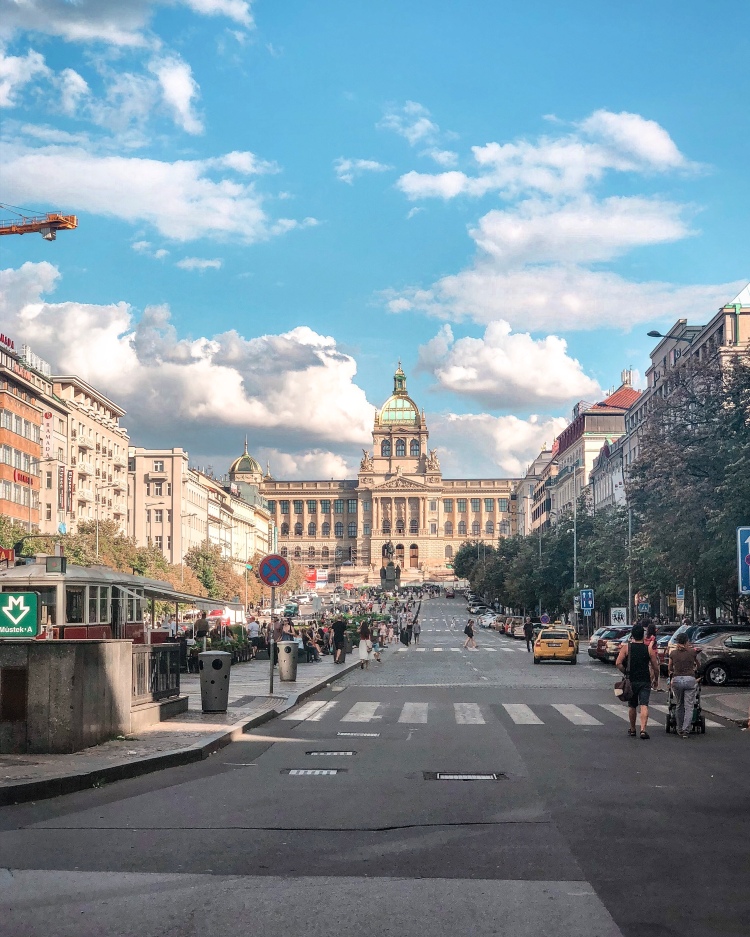 It’s been a long day, and you deserve to treat yourself to a Trdelník or Trdlo, a famous spit cake made from rolled dough that can be filled with various toppings (ice cream, whipped cream and strawberries, etc.). You would think that Trdlo is a traditional Czech pastry, but in reality it originates from the Hungarian speaking part of Transylvania and it only started being recognized as a dessert in Czech Republic in 2010! Nevertheless, it’s delicious and you should try it. 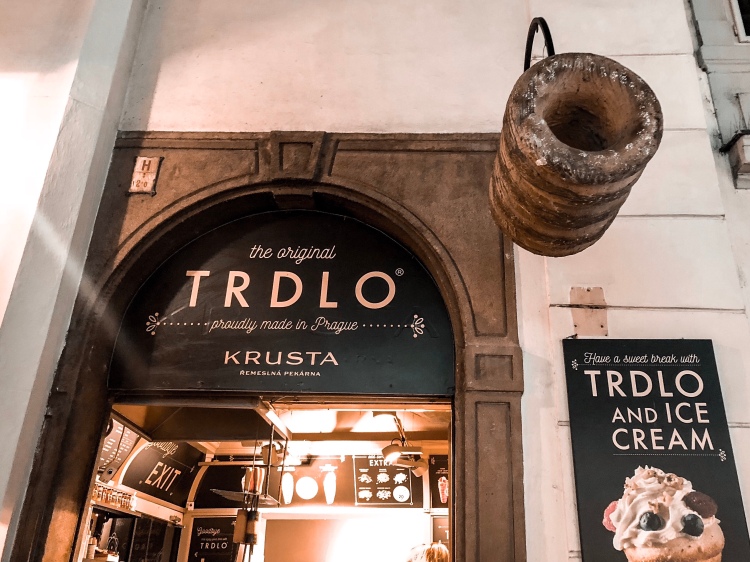 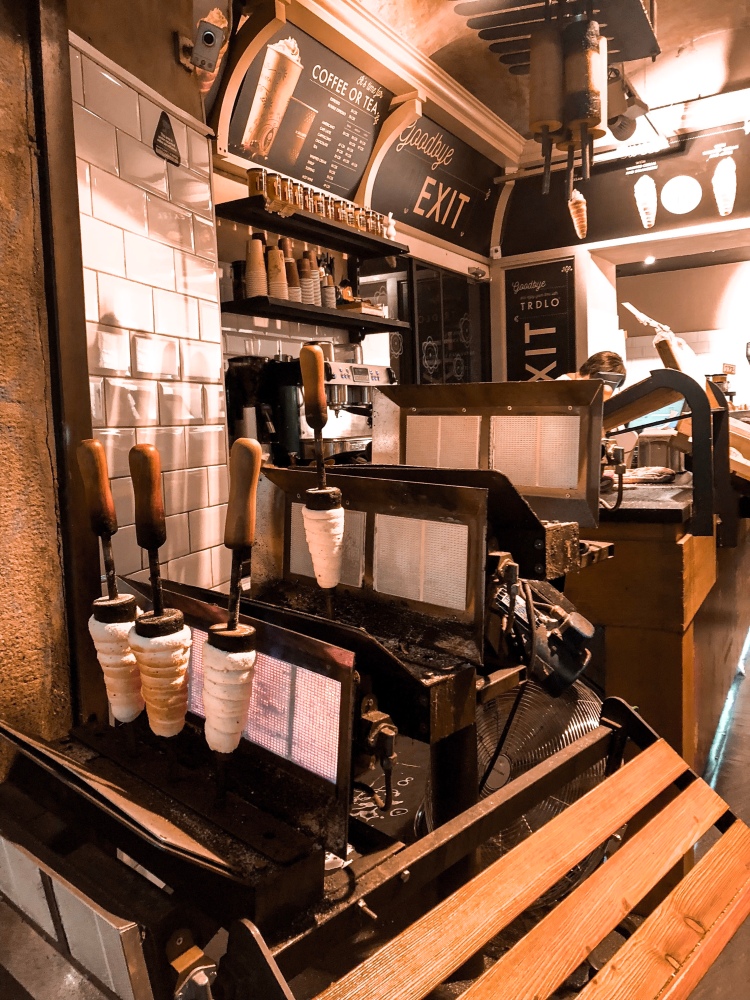 Start the day with visiting the Prague Castle, the largest ancient castle in the world. It is also the office of the President of the Czech Republic. Visitors have to pass a security point at the entrance, so be prepared for a very long queue. The admission to the castle grounds is free, but there is a fee for visiting the inside of the Old Royal Palace, St. George’s Basilica, St. Vitus Cathedral and the Golden Lane. I skipped this and only walked around a bit, and I was even lucky enough to see the Changing of the Guard.

If you are a fan of libraries, like I am, I recommend visiting the Strahov Library, within the Strahov Monastery, which is within a walking distance from the castle. The library features the Theological Hall, which was built in 1679, and the Philosophical Hall, which was built in 1779. The entrance fee is CZK 100 and an extra CZK 50 if you want to take pictures inside.

It is time to explore one of the most historic parts of Malá Strana. Founded in 1257, the district is all about art, gardens and charming streets, and is also the home of interesting museums, such as the KGB Museum and the Franz Kafka Museum.

What’s not to be missed in the Lesser Town, is the Lennon Wall. Since the 1980s, the once-normal wall has been filled with John Lennon inspired graffiti and pieces of lyrics from Beatles’ songs. The colourful graffiti began following the 1980 assassination of John Lennon and the wall is now a known attraction in Prague, packed with tourists queuing for a picture. 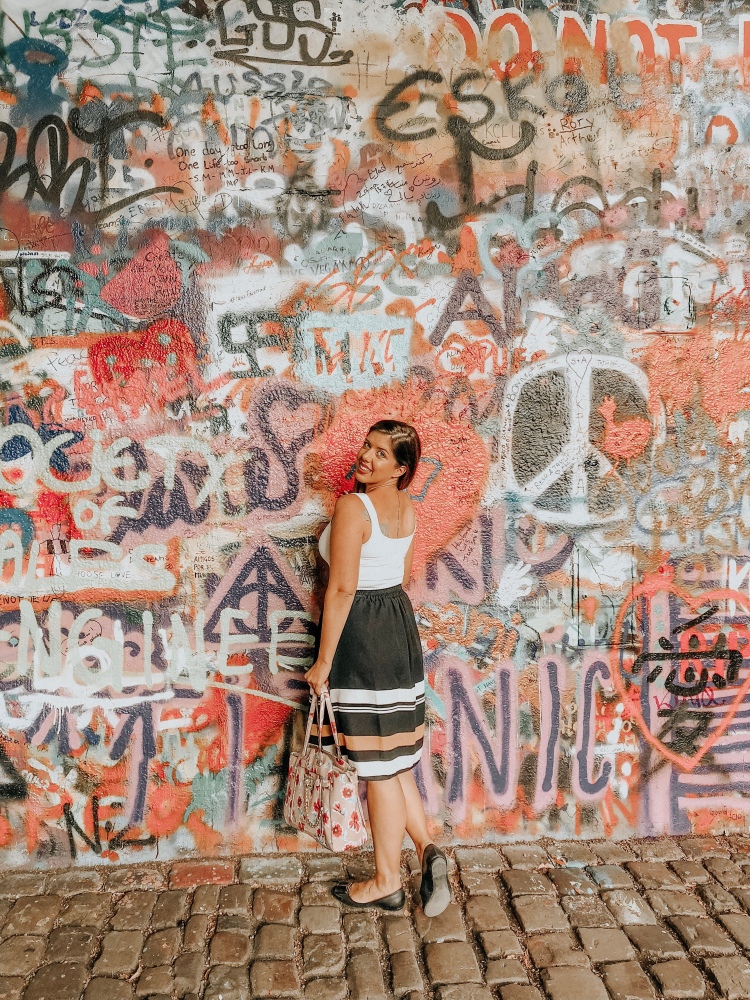 Finish the day with going back to the other side of the river. On the border of Old Town, you will find the Gothic Powder Tower (Prašná brána), one of the 13 original city gates. The tower resembles the bridge tower on Charles Bridge. It was used to store gunpowder in the 17th century, hence the name. 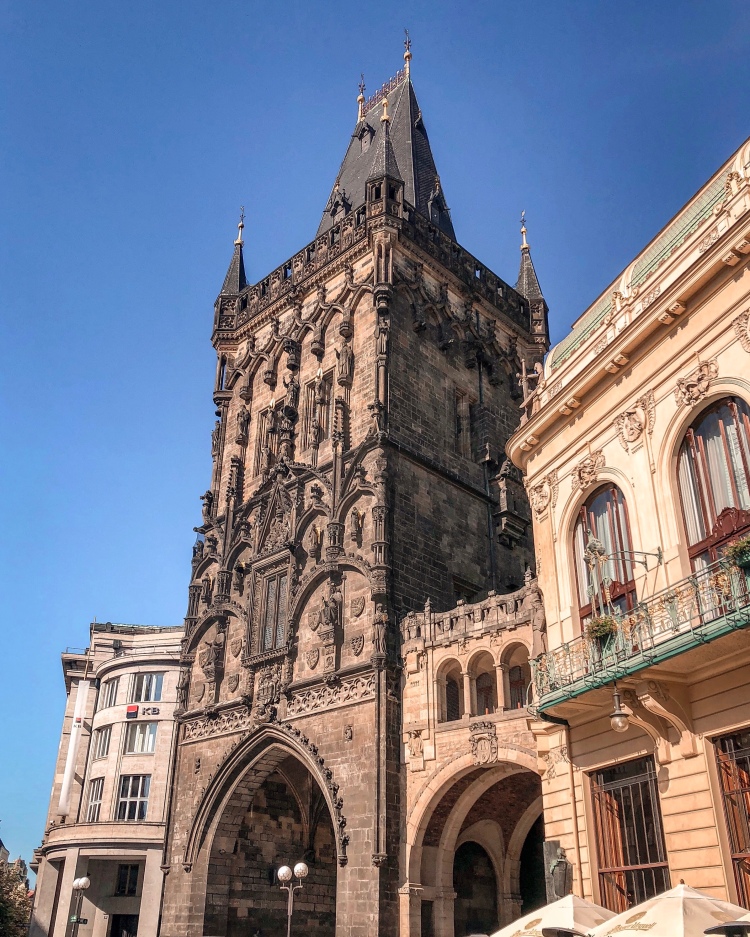 From here, you can wander into the New Town, where you will find the Republic Square and St. Henry’s Tower. 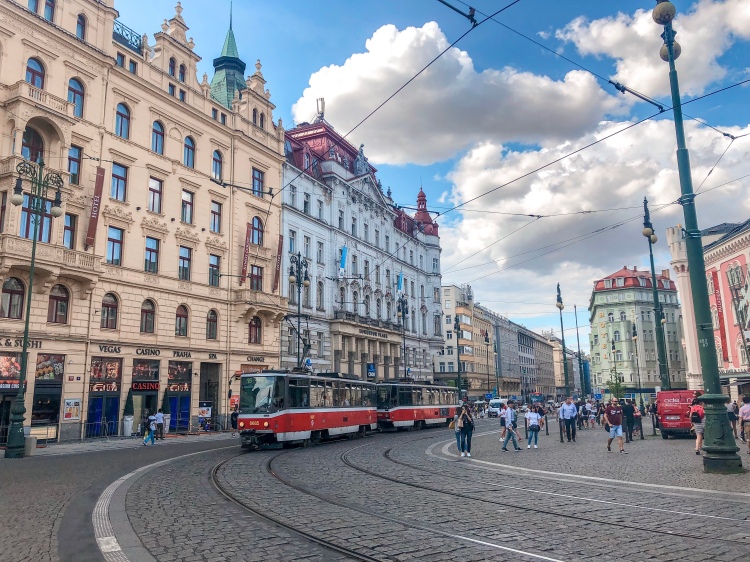 Spend the day at one of the best zoos in the world. As Prague Zoo covers an area of over 60 hectares and houses more than 4 thousand animals of over 650 species, visiting this beautiful zoological garden is definitely a whole day (or at least half-day) activity. Entrance fee: CZK 200 for adults.

How to get there?

Starting from the city centre, take metro no. 17 to Trojská station or metro no. 6 to Nádraží Holešovice station. Both stops are only a short walk (2 and 4 minutes respectively) from the Nádraží Holešovice bus station. From there, take the bus no. 112 to Zoologická zahrada station and walk approximately 50 metres to reach the entrance. 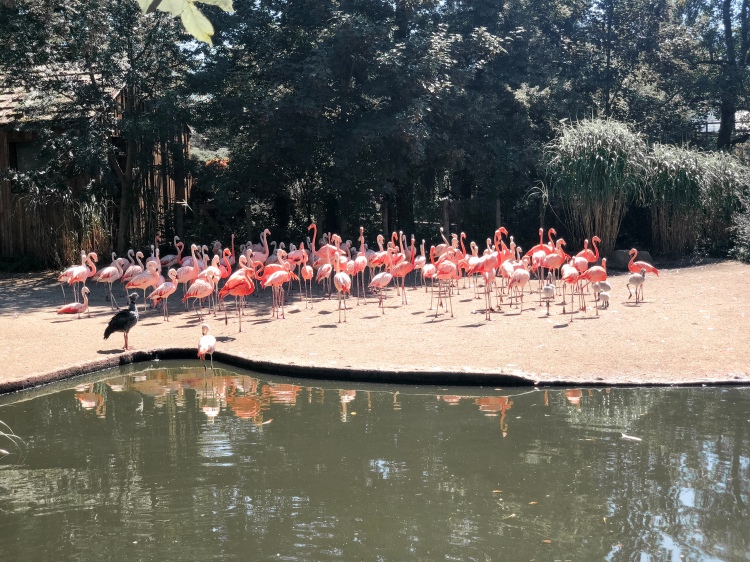 It’s your last day in Prague, but so many sights remain to be seen.

The Clementinum is a historic complex of buildings and in use as the National Library of the Czech Republic. Unfortunately, no photos are allowed inside the breathtakingly beautiful Baroque Library Hall, but trust me, it is well worth visiting (admission CZK 300). Also, the Astronomical Tower offer a nice view of the city.

The Jewish Quarter (Josefov), named after the Holy Roman Emperor Joseph II, is the former Jewish ghetto of Prague. It features six synagogues, the Jewish Town Hall, the Jewish Cemetery and Franz Kafka’s birthplace. You can wander around for free, but in order to enter the cemetery, the museum and other sites, an admission fee has to be paid (CZK 500 for all sights).

The Statue of Franz Kafka, which is also found in the Jewish Quarter, depicts the famous novelist and short-story writer riding on the shoulders of a headless figure, after the 1912 story Description of a Struggle.

For commanding views of the river Vltava and its many bridges, head over to Letna Park.

Another famous attraction in Prague is the modern Dancing House, nicknamed Fred and Ginger after the famous dancers Fred Astaire and Ginger Rogers. The building was designed by architects Vlado Milunić and Frank Gehry. 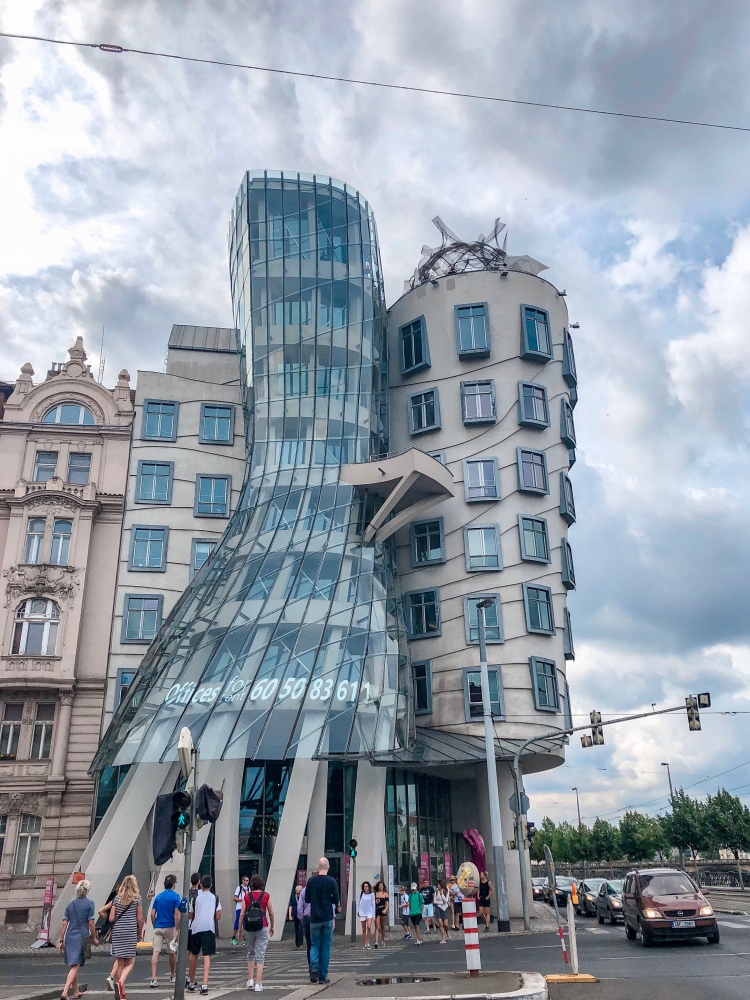 2 thoughts on “Itinerary: Prague in 4 days”